Tamara, and Also Some Sweet Gear

Tamara, of view from the porch (among other blogs), is facing basil cell carcinoma.  Like most self-employed people, she self-insured, and this is going to make her come up a bit short.  The gun-blogging community, including A Girl and Bayou Renaissance Man are asking people to chip in a bit if they can via the tip jar on her website. 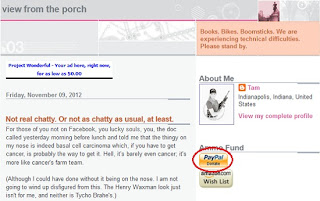 I'm going over now to throw in $5, even though I'm unemployed.  I don't know Tam personally, but, judging from her writing, she does not have the safety net that I am lucky enough to have.

If you have a moment, say a prayer for her and drop by her blog to let her know you did so.

Also, Newbius and Life in 3D are doing raffles for those who donate $5 or more.  Click through the links to see the sweet gear that you could win.

Later update: Up your donation to $5.56 and get a chance to win a viper holster from Dragon Leatherworks in time for Christmas.  Which is super-awesome b/c if you order one on the website today, it won't get here until the middle of January.  I am very, very tempted to donate again b/c I would love to give Mr. Goat this holster for Christmas.  If only I had a job!

Even Later Update: For $25, you can enter to win a Diamondback with its own holster.  Details here.

Posted by The Lost Goat at 9:27 AM No comments:

I am Worth Defending

A friends of mine posted this article on facebook yesterday.  Entitled "What it's like being a teen girl[sic]," it describes a continuous and rampant pattern of sexual assault that continued through Ms. Wolley's teenage years.  She says that this behavior was and is unacceptable, and I agree.  But here's where she and I diverge strongly.  Her take on the solution:

Pretty much everything in North American culture tells men and boys that women and girls are there for them. So please, do us some favours. Stop telling us that we have to take self defence. Stop telling us we shouldn’t drink or go out at night or on dates. Stop telling us that we need to be prepared for whatever “boys-be-boys” violations come our ways, because it’s bullshit. We don’t have to accept this or carry it around in silence.
Start talking with men and boys about the messages they’re getting about women and girls. Tell them that they are not entitled to our bodies, no matter what. Talk to them honestly and comprehensively about sexualization and objectification. Stop being afraid to talk about boundaries, sex, and pleasure—leaving that to schools, the Internet, and peers is simply not cutting it. Show them what consent really looks like.
And this sounds basic, but remind them that we’re, you know, people? We deserve at least that much.
In sum, women shouldn't have to modify our behavior, because the predatory men are in the wrong.  Instead, we should engage in dialogue with them to show them the right way to behave.

Here's the problem with this approach: Predators don't give a shit that we're people too.  Predators are here to take what they can get from you and they don't care how much they hurt you to get it.  In fact, in cases of sexual assault, hurting you is part of the enjoyment they derive from it.  So talking to them about our shared humanity isn't going to cut any ice with them.

However, predators aren't into their own pain, and they take great pains to ascertain whether you are a low risk target or not.  So, to decrease your chances of attracting a predator's attention, you want to make yourself into as high-risk a target as possible.  Additionally, you want to keep out of places that predators like to hang out.  Figuring out how to do this in the backbone of a good self-defense curriculum.

Is it fair that non-predators (men and women) have to modify their behavior to reduce their chances of being preyed on?  Absolutely not.  But I think I'm more likely to deter a predator with a force equalizer (the one I have chosen is a Glock 36) than with an appeal to our shared humanity.

I never had to live with years of sexual assault, and for that I am truly grateful.  I am glad that Ms. Wolley has moved beyond her experiences to acknowledge her self-worth.  I hope that she will someday be able to take the next step and see that self-defense is a concrete expression of that worth.

I am worth it; worth the time and the trouble to defend myself against those who take pleasure in my pain and those for whom my pain is merely a means to an end.  My daughter is worth it too; both her time and mine, her attention and thought and work.  My son will learn that women are people too, and should be respected accordingly, and he will be given the tools to enforce this with regards to himself as well.  I have important and worthy thins to do in this lifetime to prevent sexual assault; I have better things to do with my time than talk to predators.

If you would like to learn more about self-defense with firearms, a good resource is http://www.corneredcat.com/

Posted by The Lost Goat at 8:41 AM No comments:

Resolved: No More Novels Until I Get a Job, So Please Help Me with Book Suggestions

I'm having trouble using my time wisely.  Part of the problem is that Football continues to have trouble sleeping at night.  Mr. Goat was staying with her at night, and I was supervising during the day, but that was leading to me getting nothing done.  So we've changed the schedule and now I sleep next to her on the tatami all night, rather than on my Tempur-Pedic, and try to nap during the day.  It's not yet a roaring success, and my tiredness makes it easy for me to succumb to distraction.

I've always had a thing for trashy novels.  When I was twelve or so, my favorite series was Mercedes Lacey's Valdemar series (which starts with Arrows of the Queen

), and my taste in novels has not improved since then.  Let's just say that if you want any advice on good paranormal erotica, I can be your go-to girl.  And, with the rise of digital publishing, Amazon has a practically unending stream of authors writing fantasy/sci-fi/paranormal pulp who will give you their first book free.  Occasionally, one is really good (The Emperor's Edge

is a good example), but mostly I end up with stuff that's just entertaining enough that I don't put it down, but not really a fun read.  However, it is an excellent procrastination tool.

I need to get my life back on track.  My house is a wreck, neither Mr. Goat nor I is bringing in any income (unless you count paid surveys), and I'm exhausted all the time.  I need to pare things out of my life that suck time and energy, and novels look like low-hanging fruit.  I'll miss them, as I am in the habit of reading at least 100 pages of literature a day, but in their place I hope to add more Bible reading (I am only about 75% through my Bible choice for this year, The Holy Bible, English Standard Version

) and other inspiring literature ( I am thinking things like Let. It. Go.: How to Stop Running the Show and Start Walking in Faith

, which I have pre-ordered).

So I am asking for help; do you have any other reading suggestions?  They need not be religious, but I am looking for non-fiction that is either helpful with my specific current issues (finding a job, cleaning a house, raising two toddlers, one of which doesn't sleep) or localvore or pf related.
Posted by The Lost Goat at 10:32 PM 1 comment:

The bar exam results from the Louisiana Bar Exam in July are up today and I passed.  Not a big surprise but will be a big help in the job search.

Tonight we go to MSY to pick up our au pair.  Crossing my fingers that she works out.
Posted by The Lost Goat at 9:57 AM 4 comments:

Spoke Too Soon About Life Returning to Normal

Have had the most unproductive last couple of days ever.  And I have a funeral to go to tomorrow for the mother of a friend.  She was 94 and it wasn't unexpected, but it is still hard.  Also, the funeral is two hours away, so it will eat my entire day.  Friday I don't have child care, and I need to put the finishing touches on stuff for the au pair.  But I am going to sleep now so that I can at least try to do all this stuff with a decent amount of rest.
Posted by The Lost Goat at 8:49 PM 2 comments:

Life Beginning to Return to Normal

Life has been really boring here, and this blog definitely reflects that.  My mother-in-law is still here, but Mr. Goat thinks we still need her, and I trust his judgement.  Mr. Goat gets better every day.  I'm having trouble getting motivated to do anything, even though I have started to have a bit more time.

My to-do list for today is:
- work out
- consign clothing
- purchase buttons for a coat which lost one
- drop coat and buttons off at the seamstress (I could mend it myself, but I need to actually get it done)
- go to the grocery store

Doesn't sound like much but I am really having trouble getting started.  Hopefully a workout will kick me into shape.
Posted by The Lost Goat at 9:36 AM No comments:

Back Update and Going Forward

Mr. Goat's MRI came back as well as could possibly be expected (Yay no surgery!) ... so he will probably be able to lift babies in about a month.  I'm trying to figure out what we do in the interim.

Right now, my mother in law is in town (she lives in College Station, TX, about 6 hours away).  She has been sleeping on an air mattress in Monkey's bedroom every other night, and my parents are taking the babies the other nights, mostly.  This weekend my parents are having a ginormous three day party, so we'll be doing babies by ourselves all weekend.  She is a wonderful human being, but she has spent her entire life in academia, and she has no head whatsoever for efficiency.  Also, she has a tendency to mother Mr. Goat like he is about 12, which can cause some friction, especially since she is here on our request, and she is really helping out a lot.

I need to think of some way to make this work that does not involve my mother in law living here for another month.

On October 12, we have an au pair arriving from France.  I hope that she will be a help, but I expect that the first couple of weeks will be a difficult transition for her.  Until then, my brother's fiancee helps out where she can, to the tune of 30-40 hours a week.  My parents also help out when they can, which includes taking the babies all night 2 or 3 nights a week.

So I think I can make it work.  I just have to get through the weekend and get a schedule of assistance put together so I know when I can rest.

On a total tangent, I stopped pumping for Monkey and Football last week, and will be feeding them frozen breast milk for the next month until they reach the one year mark.  It is so nice to have my body completely back to myself!
Posted by The Lost Goat at 10:13 PM 4 comments: